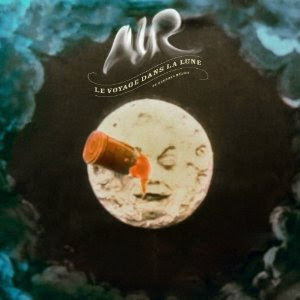 Air is a music duo from Versailles, France, consisting of Nicolas Godin and Jean-Benoît Dunckel. They are also the composers of the soundtrack for the film "The Virgin Suicides" which was the subject of our very first blog post and podcast. They could easily be considered the quintessential french pop or electronica act of our generation.

Air has recently started taking pre orders for an unusual soundtrack / film project entitled "Le Voyage Dans La Lune" which we find to be one of the most exciting projects Air has been involved in since their soundtrack for the film "The Virgin Suicides."

For those that aren't familiar, Le Voyage dans la lune is a 1902 French black-and-white silent science fiction film. It is based loosely on two popular novels of the time: Jules Verne's From the Earth to the Moon and H. G. Wells' The First Men in the Moon. 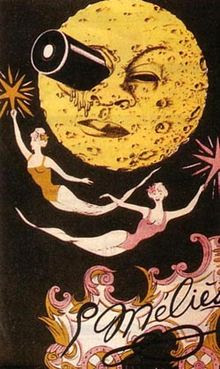 The film was written and directed by Georges Méliès, assisted by his brother Gaston. The film runs 14 minutes if projected at 16 frames per second, which was the standard frame rate at the time the film was produced. A Trip to the Moon is the first science fiction film, and uses innovative animation and special effects, including the well-known image of the spaceship landing in the Moon's eye.

After finishing work on the film, Georges Méliès intended to release it in America and thereby make lots of money. Unfortunately, Thomas A. Edison's film technicians had already secretly made copies of the film, which was showed across the USA within weeks. Melies never made any money from the film's American showings, and went broke several years later (while Edison made a fortune on the film.)

In 2002, a print of the film was discovered in a barn in France. It was amazing in that not only is it the most complete cut of the film (16 minutes long), but it was entirely hand-colored. The film was restored and premiered at the Pordenone Silent Film Festival the following year.

After creating the soundtrack to the recently discovered colorized (and highly psychedelic) version of the film, Air decided to create an entire album inspired by the film. Air's Nicolas Godin said of the album: "A Trip to the Moon' is undoubtedly more organic than most of our past projects. We wanted it to sound 'handmade and knocked together', a bit like Méliès' special effects. Everything is played live..."

The album is due out February 7th 2009 and you can preview a clip from the actual film with one of the songs from Air's forthcoming album below. This music video of sorts is quite a treat to watch, we here at Musica Phenomena were mesmerized by the new colorized imagery set to Air's music. It's a must watch and a must own in our opinion (both the colorized version of the film and the upcoming album by Air).

Posted by M Pereira and Michael Fierce at 7:59 AM