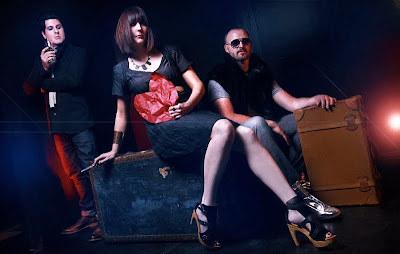 We here at Musica Phenomena were lucky enough to get advanced copies of soon-to-be-released material by The Swerve and have been hot on their tip from the get-go. Mikael Johnston, lead songwriter and producer of The Swerve, is a name we've been familiar with from his success that started with 90's San Francisco house music act, Mephisto Odyseey, and more recently, as one half of the dance production duo, Dresden & Johnston. Over the years and during these accomplishments I have always encouraged him to go back to his roots and explore the shoegaze, electronica and indie pop side to his personality and feel that The Swerve is Mikael in his true element.

Johnston teamed up with lead vocalist, Jana Hanavan, and newcomer producer, Dave Watson, to create a perfect meld of their musical backgrounds into an indie pop shoegaze bliss. Utilizing organic instruments as much as electronics, The Swerve are connected to the same music realm as other favorites of ours, I Break Horses, Stripmall Architecture (and their previous band, Halou), School Of Seven Bells, Class Actress, Au Revoir Simone, Ladytron's newest outing, and even Phantogram. For those that have been avidly following our podcasts and recent posts, you will see that The Swerve have been featured in our David Bowie "Low Broken Radio" podcast that I was fortunate enough to vocal coach Jana Hanavan on for their strikingly different rendition of "What In The World", were part of the Dark Side Of Pop compilation, and even more recently on my Ghosts Of The Virgin Suicides "Happy Haunting Ground" podcast with an exclusive early version of "Wonder" that I just love. Now, with their first official release, "Wonder" proves that they are headed for the spotlight and I believe they will find great success once they have made their presence known. "Wonder" features remixes by Rubicon 7 and Some Ember (Dylan Travis' new project - frontman of Man Miracle) and for a limited time you can download the single for free below, courtesy of Bandcamp.

Posted by M Pereira and Michael Fierce at 3:45 AM 2 comments: