Dark Side of Pop Compilation Review 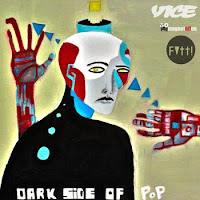 Wanting to review something special, I chose this incredible compilation from the Cowshed Records label out of Poland. Appropriately to our tastes here at Musica Phenomena, the musical styles of "Dark Side Of Pop" cover a vast array of subgenres connected to Indie and Electronic music. Dream pop, shoegaze, chillwave, ambient, indie pop, dubstep, etc., all gathered here for the melding of sometimes shimmery, sometimes challenging, cutting-edge music with the darker side of pop at the core of it's heart. Port-Royal, one of the better known artists here, start it off with a hazy slow moving storm with "Electric Tears (Nothing's Gonna Change)", that soon stirs up the ocean beneath it with a vocal that sounds like someone out there on the waves is trying to break through to the shore. A track that changes and causes more turmoil than at first expected, only to become quiet again, and because it is in the same key as the next track, seems to segue into it. Saskatchewan, a band I'd heard of but hadn't had the chance to explore before, surprise me greatly with their poppy "Skinny Dipping". This song is both catchy and dreamy and opens up the possibilities of where the direction of this album is heading while connecting the many styles nearly all-in-one. Incredibly, the next song is also in the same key, allowing for the album to really impress on me that it is a storybook of sound. The Swerve, who I've had the great pleasure of working with recently, begin their song very reminiscent of the "Virgin Suicides" soundtrack by Air, then shift into an indie pop song enshrouded in wisps of shoegaze fog. The lyrics and melody are outstanding and I imagine you will be singing them to yourself here and there like I have caught myself doing a number of times. Jana Hanavan has a very beautiful, distinctive voice that is borderline twee pop, but with serious intonations, that give the words both lighthearted hope and sadness too. The Swerve are one of the bands to watch in 2012. Next up is Sleep Party People. I hear all sorts of influences in their sound but they are completely their own. The beginning builds into something similar to OMD"s "Joan Of Arc" and when the vocal comes in I can hear everything from Radiohead to Clinic to Sigur Ros to even the more serious songs of The Residents. One of the best songs here and I have to wonder if these guys aren't going to be an overnight success. And if you're not convinced with just this one song, check out their videos on YouTube. I couldn't help but notice that other comments coincided with mine that there is a Donnie Darko like quality to the band. OK. I will try to concentrate on the highlights of this compilation so this review isn't ten pages long but most of it is a collection of highlights so it will be hard. Pleq's track is an ambient piece with a droney beat that I really enjoy. Next is "Ugle" by Electric Fitness with a melody that strongly resembles a slower "Eleventh!" from Arovane's classic "Tides" LP, and would fit as perfectly there as much as it does here. Sun Glitters are another band I'm familiar with and this one has an ambient dubsteppy thing going on with some cool vocal snatches that give it an otherworldly feel. Digital.Rape has whispery vocals, strong melodic touches and cutting edge samples, haunting all the way through. There is a lot of tension, but it is never misplaced in Herr-Etic's "Dirty Girl In Dirty World" - a perfect name for this song might I add. Then we have the vocally melodic Face+heel and I really have to hand it to the arranger of this comp, because stylistically the song is a big shift from the one preceding it but once again the transition from one song to the next is smoothly handled. The vocal outbursts of games people play are balanced nicely with the electronics, then to the percussive electronics of SBTLS, to the heavy ambient drone of KVLTIK, and with it's persistent vocal blips, is another highlight. "Altered State", another perfect name, by Sweet Garden, is an aggressive electronic instrumental, and Body Spam rides the line between ambient and dubstep. I'm not fluent in Autechre so don't make me try to pronounce the next band name, but the hieroglyphics look like this: ∑B❍L▲ ▲P∑ with their music being as interesting as their name. MJ Linckoln's 'Leon" is a nightmare of a song with a clap drum insistent until the end. Lasariage continues this darker path with a 60's campaign election sample, and I guess I should know better who it is, but couldn't quite place the speaker, that keeps the listener winding towards the end. And then it all ends with "Serenade" (hidden track), by Vortex Rikers, and if it really is a hidden track I'm glad it was found because it's one of my favorites on here and finalizes what is one of the strongest compilations I've heard this year, thus far. Up there with "Pop Ambient 2012", though far different in styles and tone. I'm going to keep my eye on many of the bands on here. And, I would like to add that the cover artwork is just fantastic, looking like an homage to Picasso as if done by Clive Barker. Highly recommended!

Posted by M Pereira and Michael Fierce at 6:04 AM